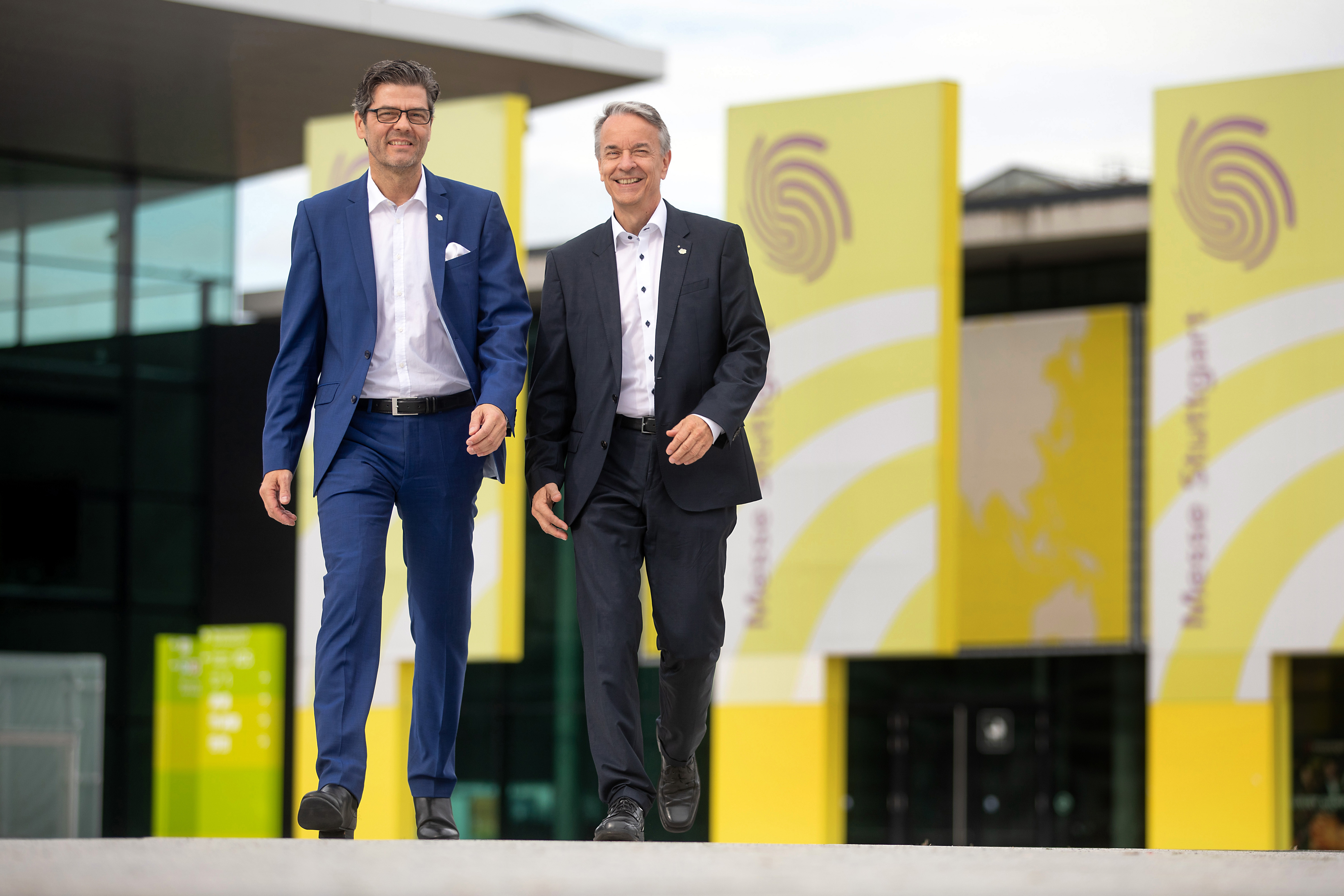 A special birthday during the crisis, quietly celebrated – a look back at an eventful era containing numerous highlights

Messe Stuttgart will turn 80 years old on 28 May 2020. Large celebrations are prohibited during the corona pandemic. "The staff and management can only celebrate virtually in their home office. However, we can certainly congratulate ourselves on what was achieved during this long period and what Messe Stuttgart now represents: it is an indispensable showcase for the economic strength of the federal state of Baden-Württemberg and an innovation platform for new developments from around the world. Especially now, for the recovery of the economy, the successful trade fair platforms created for many industries will be extremely valuable," emphasised Roland Bleinroth, CEO of Messe Stuttgart.

2020 should actually mark a new milestone in the history of Messe Stuttgart. With a turnover of around €200 million in the Group, it would have been the most successful financial year ever. Would have been, if a pandemic had not brought the world to a standstill. As things stand today, we do not know when we will be allowed to stage events again and under what conditions. However, we very much hope that we can do so this autumn ," said Stefan Lohnert, who also holds the post of President of Messe Stuttgart. Messe Stuttgart introduced short-time working on 1 April while planned new investments at the trade fair grounds have been shelved for the time being. But nobody is disheartened. The staff are working at home as far as possible and are already preparing intensively for the restart.

A look back at the history of Messe Stuttgart shows that the company had to cope with adverse circumstances very early on. In the middle of the Second World War, in May 1940, the company "Stuttgarter Handelshof AG, Ausstellungs- und Tagungsstelle" was transformed into "Stuttgarter Ausstellungs GmbH". The formal administrative act of the municipal council finally sealed the transformation on 28 May 1940. This day is therefore regarded as the official date on which Messe Stuttgart was founded. The name of the company was later changed to "Stuttgarter Messe- und Kongressgesellschaft mbH". During the Second World War, only a few smaller exhibitions were staged in Killesberg before the site of the former Reich Garden Show was destroyed in a bombing raid. This was followed by reconstruction work, and large halls were built for the "German Garden Show" in Killesberg. A large event after the Second World War and the first highlight in the 1950s during which the trade fair business really took off. The first large exhibitions were held in the following years. They included the "German Gymnastics and Sport Exhibition", the "German Pharmacists' and Pharmaceutical Exhibition", the first Bakery Trade Exhibition (the current "Südback") and the Butchers' Exhibition "Süffa", which is still held regularly in a fixed cycle. The current "Intergastra" also already existed in the past under the name "International Trade Exhibition for the Hotel and Restaurant Industry - Gastlicher Süden" (1958). In addition to the "German Garden Show", the event highlights during the 1950s" also included international boxing and athletics competitions and a performance by the""King of Rock’n-Roll" Bill Haley (1958).

During the 1960s, the "German Broadcasting Exhibition" was held twice (1965 and 1969) at the Stuttgart Trade Fair Centre. "Car-Sport-Leisure (MSF)", the forerunner of the current "CMT" exhibition, became established. The roller shutters trade fair "R", now known as the world's leading trade fair for roller shutters, doors/gates and sun protection systems "R+T", also dates back to this time.

"CMT" and "Medizin" were then held regularly from the 1970s onwards while "Interbad" was staged for the first time in Stuttgart. "Elektro-Hobby" and "Modell Süd", now part of "Messe Stuttgart's autumn line-up", were also established. Premium trade fairs such as "AMB" and "Vision" have been an integral part of Messe Stuttgart's portfolio since the 1980s. "didacta", the trade fair for education and training, was also held for the first time.

The digital world was slowly formed and then picked up speed in the 1990s. The trade fair programme was therefore extended to include "digital & online 1st Congress + Trade Exhibition for Interactive Multimedia Applications" and later the "Multimedia Market & Congress". Many other trade fairs for new technologies were also created, for instance "Microengineering, 1st Exhibition and Congress for Microsystems and Precision Engineering" in 1994. During this decade, initial events were also held in Dresden and Leipzig since they had become possible again at that time. They included "Sachsenback" and "Fachdental Leipzig".

By this time at the latest, the growth of Messe Stuttgart was unstoppable and the space problems at the site in Killesberg became increasingly more obvious. "Several events reached their spatial limits and we even lost events due to the confined space conditions," said Bleinroth in retrospect. It was quickly apparent that only new buildings would be able to satisfy the requirements relating to a modern trade fair centre with corresponding congress facilities and retain events in Stuttgart. Killesberg had become too small and was not suitable for international trade fairs and exhibitions in terms of transport logistics and infrastructure. We found a new site on the Filder, to be more precise in the district of Leinfelden-Echterdingen near the airport. There was great opposition to the project at the beginning. A bitter legal dispute lasting several years then ensued until the "New Stuttgart Trade Fair Centre" finally overcame all the obstacles.

Construction finally went ahead and Messe Stuttgart was officially opened during a grand ceremony by the then Federal President Horst Köhler in October 2007. Over a period of three days, visitors from near and far had the opportunity to look at the exhibition halls in which a very special free exhibition was held: companies from different industries presented their products and services specially to mark the opening of Messe Stuttgart. The amount of exhibition space now available (105,200 square metres) was roughly twice as much as in Killesberg and it was quickly booked up during flagship events. The pent-up demand in many industries was obviously even larger than that had been predicted.

At that point, at the latest, the reservations concerning the New Stuttgart Trade Fair Centre had given way to enthusiasm. The town of Leinfelden-Echterdingen even renamed itself the "trade fair town". A wonderful sign of identification with our work," said a delighted Lohnert in regard to the now harmonious and respectful neighbourliness which has also been developed with the other communities on the Filder. Since then, a large number of new hotels used by trade fair visitors and exhibitors have been constructed in their districts. What's more, this also benefits the increasing number of restaurants, the taxi trade and shops; cultural and leisure offers are also welcomed during business trips. "It is therefore important both for the industries covered by our events and Messe Stuttgart itself that trade fair operations can restart, but also for our numerous service providers and our environment," warned Bleinroth.

The next step towards expansion was marked by the establishment of foreign subsidiaries. In 2009 Messe Stuttgart founded a Turkish trade fair subsidiary which is now called Messe Stuttgart Ares. In a short space of time, it has become a market leader in the region where it locally covers some of the trade fair topics in Stuttgart. A joint venture with the company operating Messe Nanjing followed in 2011 on the future market of China. Then came a very dynamic and successful development of a large number of trade fair topics. A subsidiary was also founded in the USA in August 2013 and started with trade fairs relating to the area of sustainability. As international business expanded, the international participation rate at leading events in Stuttgart increased visibly and to an above-average extent – much to the delight, in particular, of medium-sized exhibitors for whom "their shop window to the world" is often indispensable for their business.

As a result of the development that actually exceeded all ambitious expectations, Messe Stuttgart soon reached its spatial capacity limits again at its new site. This is the reason why the construction of the tenth exhibition hall was accelerated and was opened right on time for CMT in January 2018. This new exhibition hall increased the amount of exhibition space at Messe Stuttgart to the current figure of 120,000 square metres.

Important construction work is again being carried out around Messe Stuttgart at present. "Right now, our trade fair centre is one of the few in the world that is easy to reach in terms of traffic infrastructure," said Lohnert. The site is directly connected to Stuttgart Airport, the A8 motorway and the B27 trunk road. The urban railway (S-Bahn) transports exhibitors and visitors from Stuttgart city centre to exhibitions and congresses in around 30 minutes. An underground railway connection will follow by the end of 2021. As part of the Stuttgart 21 railway project, there will also be a railway station for long-distance trains directly at the trade fair grounds in the foreseeable future.

Messe Stuttgart was and is a trendsetter, and reflects market developments. It brings supply and demand together. "A personal discussion cannot be replaced by digital tools, but digital platforms will probably complement the reach of our trade fairs and exhibitions to an increasing extent," said Bleinroth.

However, trade fair organisers not only attach importance to business today, but also to the future world. Messe Stuttgart has always paid attention to environmental issues and climate neutrality. Solar cells are installed on the roofs of our exhibition halls while the award-winning layer ventilation system saves energy and increases comfort. Exhibitors and visitors can charge their electric cars - and also only recently their e-bikes - for free at charging stations on the trade fair grounds. Messe Stuttgart has incorporated many other measures in its sustainability concept. "We believe it is our special responsibility to play a leading role in the area of sustainability in the trade fair and congress business. Also in regard to future generations," said Lohnert in this respect.

UK_20_PM15_Bild_2: Stefan Lohnert (left) and Roland Bleinroth, the Presidents of Messe Stuttgart, on the anniversary: "Staff and management can only raise a glass in their home office. However, we can certainly congratulate ourselves on what was achieved during this long period and what Messe Stuttgart now represents." (Copyright Messe Stuttgart)

UK_20_PM15_Bild_3: A historic poster relating to Car-Sport-Leisure, the forerunner of CMT, from the 1970s. (Copyright Messe Stuttgart)

UK_20_PM15_Bild_4: Aerial photo of the old trade fair centre which was located in the middle of a residential area and directly in the Killesberg Park. (Copyright Messe Stuttgart)

UK_20_PM15_Bild_5: Opening of the "New Stuttgart Trade Fair Centre" in October 2007 by the then Federal President Horst Köhler (at the front, waving). (Copyright Messe Stuttgart)