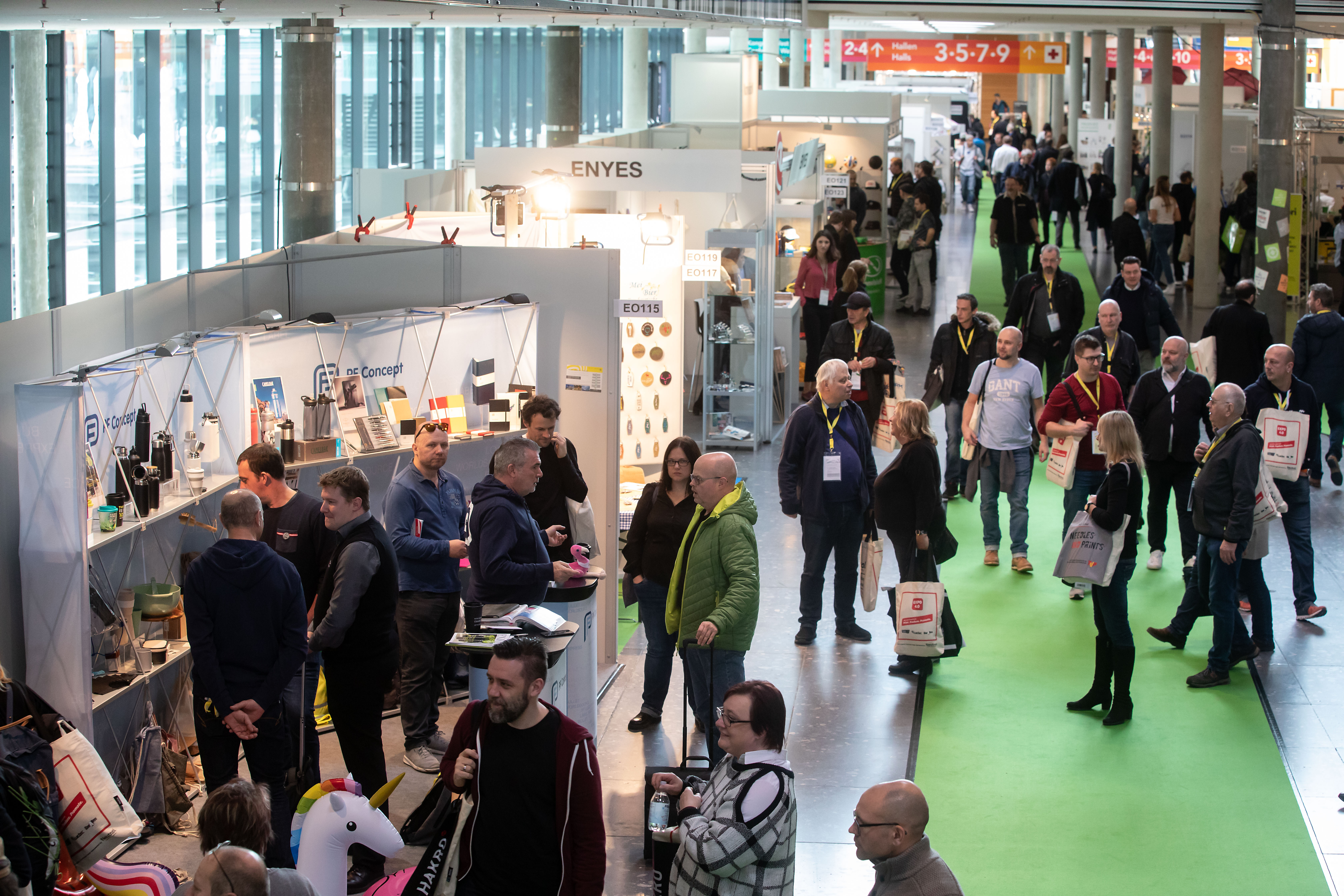 The trade fair combination for visual communication and haptic advertising, EXPO 4.0, was an impressive event with 421 exhibitors and 12,518 visitors held from 30 January to 1 February 2020 in Stuttgart: GiveADays completed the offer of the trade fair combination with 56 exhibitors. In spite of the challenging market situation, the trade fair provided a good overview of promotional articles and haptic advertising for the entire range of visitors, from service-providers to trade and industrial customers.

The quality of the specialist visitors has for many years been a reliable constant feature of EXPO 4.0: four out of five visitors play a decisive role in purchasing and procurement decisions, 87 per cent have concrete intentions to buy, and 84 per cent of visitors want to invest within the next 12 months. An overall rating of the trade fair combination with the grade 2.0 and the intention to return on the part of three out of four visitors underline the positive synergy effects that result from the fact that the three trade fairs in the EXPO 4.0 trade fair combination are held in parallel. This is also reflected in the amount of time visitors spend at the event - on average 4.8 hours at the three trade fairs.

Benefit from the opportunities of the strong south-west in 2022

For the next edition of the trade fair, the organisers plan to expand the concept - the optimum location at the centre of the market in the economically powerful south-west of Germany and in the vicinity of Switzerland and Austria is the basis for GiveADays. The good transport connections of the Stuttgart Trade Fair Centre for travel by air, car and rail make expansion into new markets and target regions possible for 2022. The next GiveADays will take place in the EXPO 4.0 trade fair combination together with TV TecStyle Visions and WETEC in two years.
The dates 10 to 12 February 2022 are currently reserved.

Manfred Wansner, Sales, Böckling:
We had significantly more visitors and more good discussions than expected. The enquiries were very detailed and technically well-founded, and visitors came to us with very concrete conceptions. We noticed that, beside visitors from the greater Stuttgart region, there were also visitors from Bavaria and outside Baden-Württemberg, even from Austria and Switzerland.

Stefan Pritschet, Pins&mehr:
Initially, we were sceptical about the concept of having GiveADays take place in the foyer. After the event, we think the idea was great! We had a brilliant stand at which the visitors could see us from two sides. The first two days of the trade fair went very well. In any event, we will definitely come back in two years, provided the trade fair takes place. The mood among the visitors was very positive and the difficult market situation was barely noticed. The visitors mainly came from Germany, especially from Baden-Württemberg, Bavaria and North Rhine-Westphalia.

Jörg Lieberwirth, Bäckerei Lieberwirth:
We are absolutely satisfied with the way the event went and the visitors at GiveADays.
Initially, we were a little sceptical about whether the relocation from Hall 5 to the foyer was a good idea – but now we are really pleased with it. We had more visitor contacts and the concept was also very well received by the visitors.

Tobias Tränkle, VOGEL'S Süsse-Werbe-Ideen:
We are taking part at GiveADays for the first time, and are delighted that we decided to exhibit here. We are very pleased with the number of visitors and have been able to conduct good discussions and make contacts. We were not only able to talk to our existing customers, we also received new potential customers and visitors from all over Germany. On the first day, there were even some from Berlin.
We also made contact with people from Austria, Switzerland, Finland and other countries – but most of the visitors were from the region. Also project management communicated very well with us, and found quick solutions for any concern. The registration system is really great. However, it was a pity that some services, such as electricity or carpets, incurred extra costs, instead of being part of the standard offer as at other trade fairs.

The final report of TV TecStyle Visions can be found here:
www.messe-stuttgart.de/tecstyle-visions/journalisten/pressematerial/

The final report of WETEC can be found here:
www.messe-stuttgart.de/wetec/journalisten/pressematerial/

GAD_20_P_032: GiveADays, with 56 exhibitors, completed the offer of the EXPO 4.0 trade fair combination.

GAD_20_P_029: GiveADays served the entire range of visitors, from service-providers to trade and industrial customers.

GAD_20_P_007: An overall rating of the trade fair combination with the grade 2.0 and the intention to return on the part of three out of four visitors underline the positive synergy effects that result from the fact that the three trade fairs in the EXPO 4.0 trade fair combination are held in parallel.
Messe Stuttgart holds the copyright to all images.

Cookies facilitate the use of our services. By using our services, you agree that we collect cookies. More information