The best gelato makers again competed against one another at GELATISSIMO 2020. Their task: to produce the best gelato in the hazelnut, yoghurt and strawberry flavours on the first three days of the competition. An expert jury then selected the winner on each day. The winners received a brand-new Vespa and qualified for the final round.

The champion of the Grand Prix GELATISSIMO was determined during the grand finale on the fourth day of the trade fair: the finalists from the previous three days provided a live demonstration of their skill producing the best mango gelato. The expert jury then selected the overall winner and handed over the coveted trophy, the Coppa GELATISSIMO.

An additional gelato competition, the "Intercoppa", was staged for the first time in 2020 on the last day of the trade fair. The three finalists in the Grand Prix GELATISSIMO 2020 competed here against the Grand Prix finalists from the two previous years in the category "beer gelato". The best gelato maker was not only able to enjoy a proper litre of beer afterwards, but also won a Caribbean cruise!

Overview of the winners

The secrets of gelato production

At the largest trade fair for handcrafted gelato north of the Alps, the gelato professionals Filippo Zampieron and Federico Maronati from the Artigeniale Rovigo School and Giorgio Ballabeni from Ballabeni Ice Cream Munich shared their expertise in live shows and workshops exclusively on the Grand Prix GELATISSIMO stage from 15 to 19 February. 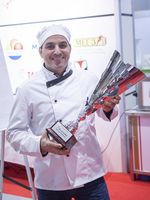 Cookies facilitate the use of our services. By using our services, you agree that we collect cookies. More information